Each assignment will have an FAQ linked at the top. You can also access it by adding “/faq” to the end of the URL. The FAQ for Lab 02 is located here.

To debug a program, you must first know what’s wrong. In this lab, you’ll get some experience with using the debugger to see program state. When you run into a bug, the error is accompanied with a “stack trace” that details the method calls that caused the error in the first place. One of the focuses of this lab will be to get you used to reading these stack traces, because they can be super helpful in debugging your own code.

In this lab, you will enhance your code debugging abilities by defusing a (programmatic) bomb and debugging a text adventure we have written. We’ll guide you through this process, but the intention is to make this a realistic debugging experience.

By the end of this lab, you will…

Added to our implementation in Wednesday’s lecture are two methods in the IntList class, print and of. The of method is a convenience method for creating IntLists. Here’s a quick demonstration of how it works. Consider the following code that you’ve seen in lecture for creating an IntList containing the elements 1, 2, and 3.

That’s a lot of typing, and is quite confusing! The IntList.of method addresses this problem. To create an IntList containing the elements 1, 2, and 3, you can simply type:

The other method print returns a String representation of an IntList.

These methods mostly provide convenient ways of creating and displaying IntLists, respectively. We use these convenience methods to make testing easier.

The BombMain class calls the various phase methods of the Bomb class. Your job is to figure out what the passwords to each of these phrases is by using the IntelliJ debugger.

The code is written so that you can’t find the password just by reading it. For this lab, you are forbidden from editing the Bomb code, whether to add print statements or otherwise modify it.

The point of this exercise is to get comfortable using tools that will help you a lot down the road. Please take it seriously!

So far, you might have practiced debugging by using using print statements to see the values of certain variables as a program runs. When placed strategically, the output from printing might help make the bugs obvious or narrow down their cause. This method is called print debugging. While print debugging can be very useful, it has a few disadvantages:

In this lab, we’ll show you a new technique, interactive debugging – debugging by using an interactive tool, or a debugger. We’ll focus on IntelliJ’s built-in debugger.

Before starting the IntelliJ debugger, you should set a few breakpoints. Breakpoints mark places in your code where you can suspend the program while debugging and examine its state. This:

To set a breakpoint, click the area just to the right of the line number. 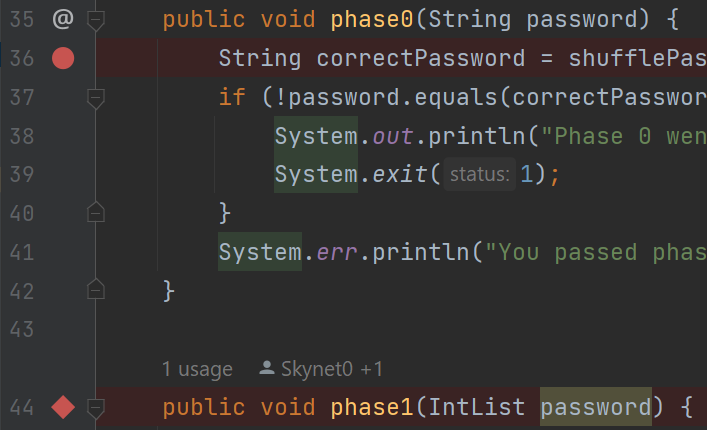 A red circle or diamond should appear where you clicked. If nothing appears, make sure that you click next to a line with code. When the debugger reaches this point in the program, it will pause before the execution of the line or method. Click the breakpoint again to remove it.

The selected program should run until it hits its first breakpoint. A debugger window should also appear on the bottom of the interface, where the console was. 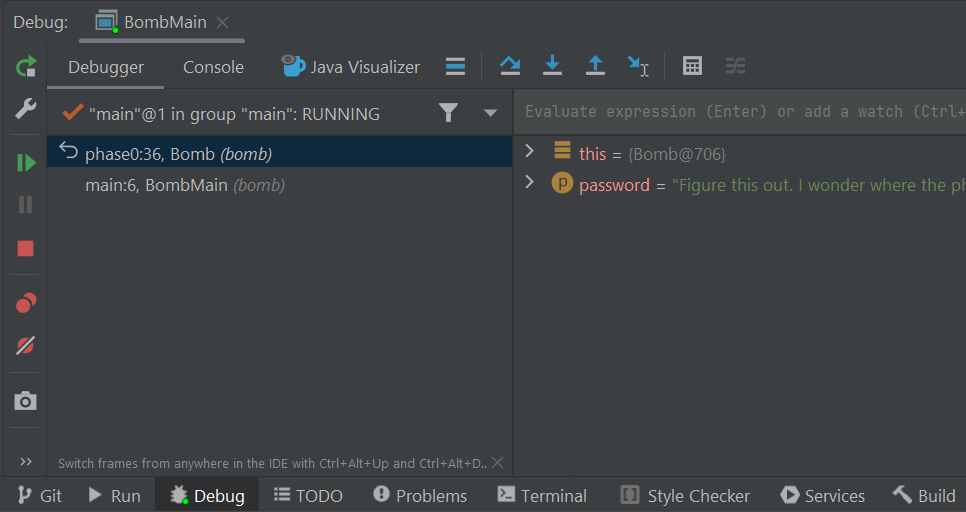 In the debugger, you have a few options:

To see the console output (and type into the console) while debugging, click the “Console” tab next to “Debugger” in the top left of the debug window, just above the frames. If you want to see everything simultaneously (while being more compressed), you can drag the console tab to the far right of the bottom panel. Here’s a GIF from a previous semester that shows this (IntelliJ looks different, but the action is the same.)

For this lab, we will be providing hints. Please only use them if you’re stuck! You’ll get much more out of the exercises if you try to solve them on your own first.

Task: Set a breakpoint at phase0 and use the debugger to find the password for phase0 and replace the phase0 argument accordingly in bomb/BombMain.java.

Once you’ve found the correct password, running the code (not in debug mode) should output “You passed phase 0 with the password <password>!” instead of “Phase 0 went BOOM!”

While being able to see variable values is great, sometimes we have data that’s not the easiest to inspect. For example, to look at long IntLists, we need to click a lot of dropdowns. The Java Visualizer shows a box-and-pointer diagram of the variables in your program, which is much better suited for IntLists. To use the visualizer, run the debugger until you stop at a breakpoint, then click the “Java Visualizer” tab.

The password for phase 1 is an IntList, not a String. You may find the IntList.of method helpful.

Task: Set a breakpoint at phase1 and use the Java Visualizer to find the password for phase1 and replace the phase1 argument accordingly in bomb/BombMain.java.

Sometimes you may want to have your program pause only on certain conditions. To do so, create a breakpoint at the line of interest and open the “Edit breakpoint” menu by right-clicking the breakpoint icon itself. There, you can enter a boolean condition such that the program will only pause at this breakpoint if the condition is true.

Another thing you can do is to set breakpoints for exceptions in Java. If your program is crashing, you can have the debugger pause where the exception is thrown and display the state of your program. To do so, click

in the debugger window and press the plus icon to create a “Java Exception Breakpoint”. In the window that should appear, enter the name of the exception that your program is throwing.

Task: Set a breakpoint at phase2 and use the debugger to find the password for phase2 and replace the phase2 argument accordingly in bomb/BombMain.java. Remember, don’t edit Bomb.java!

Note: The password isn’t given explicitly like in the previous phases. Rather, your task is to construct an input so that the boolean correct variable is set to true after phase2 is run.

At this point, you should be able to run the tests in tests/bomb/BombTest.java and have all of them pass with a green checkmark.

Running the Game and Tests #

The very first thing you should do is run the main method in AdventureGame to run through the game. This will give you a sense of what the program you are debugging is actually supposed to do. Then, after you’ve run the game, run the tests in tests/adventure/AdventureGameTests. They should fail on BeeCountingStage which will lead you into debugging the first error below.

When a runtime error occurs in Java, a stack trace is printed to the console to provide information on where the error occurred and what steps the program took to get there. When running Adventure for the first time, your stack trace will look something like this:

The first thing to note is what kind of error occurred; this is shown at the first line of the stack trace. In this case, our code threw a NullPointerException.

For some exceptions, including NullPointerExceptions, Java will give you an explanation. Here, this.input is null, so we can’t invoke (call) a method on it.

You can click on blue text to navigate to that file and line.

For each of the following stages, only change what is necessary! You should not be rewriting entire blocks of code unless otherwise specified. We’ve included how many lines we changed as a guideline.

Note: You can run through the adventure game each time if you’d like to validate correctness, but you don’t need to - feel free to debug through the tests directly. This can be done by setting a breakpoint in playStage for the appropriate stage file you’d like to debug, then debugging AdventureGameTests.

Task: Fix the NullPointerException that occurs in BeeCountingStage by analyzing the stack trace. You can ignore the lines with <XX internal calls>; these are from test framework or library code and usually won’t help you find errors.

It turns out that this isn’t the only error in BeeCountingStage!

Note: Ignore the grey links to Objects.java and ArrayList.java at the top of the stack trace. The error may have occurred in code that was not yours, but the root cause was probably something your code tried to do.

Optional for This Week Only #

Note: Due to the Project 0 deadline and the length of this lab, the following tasks are optional for this week only. We still recommend you complete them for more practice debugging before finishing Project 0, but they will each be worth 0 points for Lab 02. They will be required and worth points for Lab 03.

Task: Fix the error(s) in SpeciesListStage. If you don’t see what the issue is inside the method where the exception occurred (the top line of the stack trace), it’s often a good idea to look at the second line to see where the method is being called from, and with what arguments.

Task: Sometimes, IntelliJ will tell you something that it thinks is wrong. Hover over the yellow / orange highlights in the method with the bug. Does that give you any useful information?

Use this feature to address the error(s) in PalindromeStage.

Note: If the debugger feels unresponsive, it is usually due to an infinite loop somewhere in your code. If you set a breakpoint and it is never reached, then you know an infinite loop occurs before the breakpoint! Use this in combination with stepping to isolate the problem.

There are two different bugs that make the method return an incorrect result. You can assume the input parsing code in playStage works correctly.

To find the bugs, you should not step into the mysteryMax or mysteryAdd functions, or even try to understand what they are doing. That is, you should use

to only see the result. These are mysterious functions that are deliberately obfuscated. If you find yourself having accidentally stepped into one of these two functions, use the

Even without stepping INTO these functions, you should be able to tell whether they have a bug or not. That’s the glory of abstraction! Even if I don’t know how a fish works at a molecular level, there are some cases where I can clearly tell that a fish is dead.

Task: Fix the two bugs so that sumOfElementwiseMax returns a correct result.

If you find a bug in mysteryMax or mysteryAdd, rewrite the method entirely instead of trying to fix it. Don’t rewrite code unnecessarily, though – be sure that it’s broken first!

At this point, the test for correct inputs should pass. That test is testing a correct input to the adventure game. The second test checks an incorrect input (meaning one that gets something wrong at some point during the game). You should have gotten an error this time which tells you that the output the game gave did not match the output we expected. Click on <Click to see difference>, and IntelliJ will tell you where and how the long String outputs differed. Specifically, in this case, SpeciesListStage has a bug.

Task: Go back to SpeciesListStage to find and fix the bug (if you didn’t find it before). You may find what you learned in PalindromeStage helpful.

After completing this task, all of the tests should pass.

The lab is out of 256 points. There are no hidden tests on Gradescope. If you pass all the local tests, you will receive full credit on the lab.

Just as you did in Lab 1, add, commit, then push your Lab 2 code to GitHub. Then, submit to Gradescope to test your code. If you need a refresher, check out the instructions in the Lab 1 spec and the Assignment Workflow Guide.

This assignment is adapted from Adam Blank.